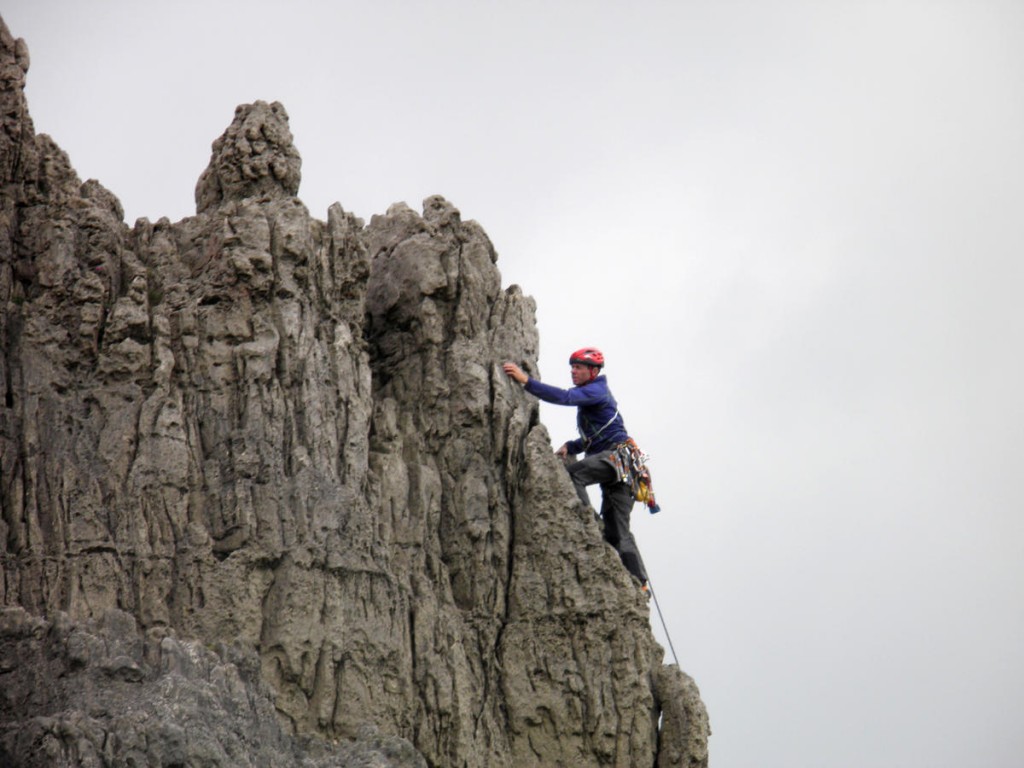 Climbing for people with disabilities

If ever there was a sport that seems inaccessible to anyone with disabilities it is climbing. It takes place on remote hillsides or overhanging walls, it requires full commitment and no mistakes, you need all your facilities intact. You can’t imagine a blind man walking to the base of a wall with his guide dog – and then climbing up it. But that is exactly what John Churcher does. “Climbing has given me a life. It has given me so many different experiences, so many opportunities that wouldn’t have happened otherwise.”

John was born with hearing loss and a gradually worsening visual impairment. He was already marked out as different by two hearing aids he often refused to wear, and then as a teenager his vision began to deteriorate. “Looking back I think that I always had a visual impairment. I have never seen stars, experienced the night sky, or seen aeroplanes or flying birds.  At age 14 my eye condition was identified as Retinitis Pigmentosa (RP), and I was then diagnosed as having Usher Syndrome. I was told that I would be blind by age 35.”

John is a stoic man, guarding his words and sticking to the facts when sharing his story. As a teenager, he accepted the grim news in the same spirit and battled on trying to ignore his condition, refusing any support. “I didn’t want other people to know that I was visually impaired. I didn’t want to stand out as different, I didn’t want people to stare. I just wanted to be treated the same as everyone else.” By the time he was in his thirties, he had to accept the reality of his condition. He started using a white cane and then eventually trained to use a Guide Dog. “Having a cane or a dog does make a big difference, particularly when walking in crowded places as people do move out of the way. Prior to that I think people assumed that I was a rude young man if I bumped into them. They had no way of knowing that I was visually impaired.”

John started climbing in 2010, when a friend invited him to go with her to a climbing wall, and he took to it immediately.  “It gave me a sense of achievement and a feeling of being normal. When I’m on the wall I don’t feel like a Deafblind person, I just focus on the next movement.”

When John had qualified with his Guide Dog Annie, a golden labrador, they had learnt the routes to take his daughter to school, and to go into the city centre. Now they set out to learn the way to get to a local climbing wall and to the outdoor gear shops. 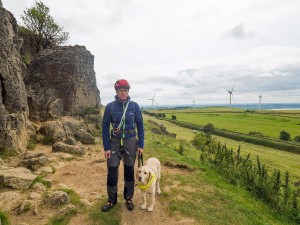 Doing some research, he discovered that the BMC www.thebmc.co.uk ran Paraclimbing competitions. Now he had a goal to aim for. “Climbing became my life as I focused on improving my strength, fitness and climbing skills.  That same friend took me along to her climbing club, introduced me to her friends and supported my early Paraclimbing competitions as my sight guide.” John quickly proved successful and was invited to join the Great Britain Paraclimbing Team . “I have now been on the team for 4 years and I am still very proud to wear my team kit. My proudest moment was seeing the Union Flag when I was on the podium at the World Championships in Spain in 2014.”

John has 3% tunnel vision, which means he’s never seen someone else climb, he can’t learn by watching what others do. And when climbing himself, he can’t see where he’s going. He uses a sight guide, who tells him where the next hold is by using the numbers on a clock face – left hand to 3 o’clock, or by locating a hold relative to his body – by his right knee. “When climbing in a noisy environment it can be difficult to hear the sight guide.  In competitions I now use a one-way radio microphone, and when this failed in the recent World Championships we actually used our mobile phones.”

Climbing gives John confidence and validation, a chance to feel not just normal but successful.  “The climbing club members are very supportive and will come along to watch me in competitions. My wife and daughter are very supportive, and are proud of my achievements.” 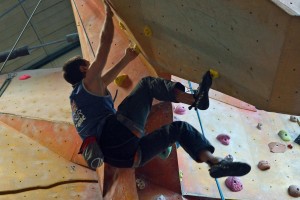 However, people with disabilities face the added problem that many things can only be done with the support of family, carers or friends, and the instinct of those supporters can be to shield someone from risk rather than expose them to it. John is passionate about persuading people to try climbing. His message to anyone who has someone with disabilities in their life: “enable them to give it a try and accompany them on their first visit. An Indoor climbing wall provides a very safe, controlled environment, with qualified staff and appropriate equipment.  Climbing provides a full workout for the mind and body.”

John is a strong indoor climber, who has onsighted 7a. However, he is not prepared to stay in that safe, controlled environment. He also climbs outdoors, which he actually finds easier. “I don’t have to follow a set route. I locate holds through touch. Once I’ve used a hold for my hand I can usually remember where it is and find it for my foot. My hardest lead climb outdoors is a severe (S), at Stanage.” His biggest frustration is not the climbing, it’s about the access. “I don’t get to do as much outdoor climbing as I’d like, I’m not sure if people are afraid of taking a blind person out climbing.”

So when his competition sight guide, Mark McGowan (@markmcgowan01) suggested they climb the Eiger together, John’s answer was an instantaneous YES. They were joined by two more paraclimbers, a woman with multiple sclerosis, and a young man with autism. They climbed the Eiger via the West Flank Route, and reached the summit on 26th July 2015, making John the first blind person to do it.

“We planned, we trained, and we made it happen. It was an amazing experience. There were people who felt that it shouldn’t be done, that we should choose a different mountain. That spurred us on to prove that people with disabilities should be able to have adventures and take risks.” They won a National Outdoor Award for ‘Inspiring Others’ and the film of the climb premiered at the Kendal Mountain Film Festival.

John is passionate about continuing to push boundaries. On a personal level he wants to raise his climbing grade indoors and out, increase his fitness and start doing marathons with a guide runner. In the paraclimbing world he is active in promoting awareness and access for visually impaired climbers.

“My goals for the future are to improve my indoor grades and to push the limits of what people think a visually impaired person can climb outside.”

Useful links:
Find John on his webpage www.johnchurcher.co.uk or via Twitter @jcchurcher.

Further information about how to get into climbing with disabilities and videos of climbers with a range of disabilities excelling at the sport www.thebmc.co.uk/disability-neednt-stop-you-climbing

A useful booklet to help you get started: Climbing for All: Disability Awareness in Rock Climbing