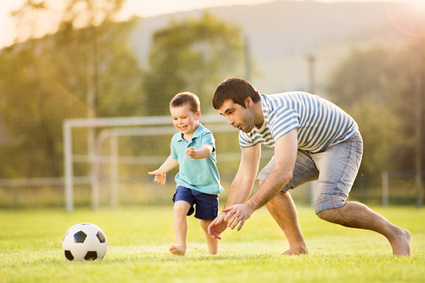 Children are curious, curious about new things, curious for movement. Shout and scream, race, jump, these are children’s needs. When children do sports, the following is promoted: the development of motor activity, and hence responsiveness, sense of balance and motor coordination. It will not only strengthen muscles and bones, but will also increase their balance, concentration, they will be more goal oriented and often even smarter! Toddlers are constantly in motion. Remaining silent is difficult – either to change nappy or to eat. The older the children get, the less they move. At the age of five years, they move at least four percent intensively, but they spend already 76 percent seated. Children at this age should be moving intensively at least 60 – 90 min. The reality is different – if they move 20 minutes a day, it seems to be much, and that’s the main reason why children get overweight and clumsy.

Movement is always good, but in the fresh air even more – it strengthens the immune system. It is proven that children who move daily outdoor, are rarely sick. There is no bad weather, only the wrong clothes!

Movement promote concentration – hopping, running and raving. Lots of exercise makes kids smart, exercise increases the performance and learning ability of children. The more stimuli from the musculoskeletal system arrives in the kids brain, the better it develops. In the first few years of children’s life the brain needs a variety of inputs, thus all nerves are able to connect and network. With an inactive lifestyle many important nerve connections would not develop. This is also reflected in the language development.

Movement and language development are interdependent and are mutually dependent. That’s why a lot of exercise improves the child’s language development. Since the speech centre is interlinked in the brain with the control centre for the fine motor skills (and thus also the dexterity), your child can learn to speak only when it has acquired certain skills.

Children who have physical control and movement skills, move certainly not only in real spaces. Children who can safely orient and move in space, don’t have any difficulties even with numbers. Children who can run well backwards, have often fewer problems in teaching arithmetic when subtracting. They learn to understand their environment out of the movement. Balance or acceleration are both physical and fundamental physical experiences that can be experienced only through movement. Children who do not move enough, have problems to develop a sense of what is real. They have problems to assess important things correctly in their environment. Children who move sufficiently, are more concentrated, more receptive and alert.

Sport improves the social skills of children. Especially in gymnastics with others or team sports, children learn for life. For a game to succeed, rules are necessary. Fairness is at a premium. In a group children practice to follow the rules and to be considerate of others. They have to wait for their turn, avoid each other in the game and coordinate with others in order to form a good team. They learn to be jointly responsible for something and improve their cooperation. Even the stamina is strengthened. But even from pure movement the child benefits: it can reduce aggression, it is bold and dares more. Movement lifts the mood! Even kindergarten children are often anxious, shy or helpless. Often they already complain of headaches or abdominal pain. Would you have thought that may be the reason for that is lack of exercise? Ten minutes of exercise a day elevates the mood. Mood improves in proportion to the amount of movement, because body’s chemical messengers, called neurotransmitters, are released:

A leisurely walk is sufficient to increase the cerebral blood flow by 20 percent, improves oxygen supply and dopamine, the “lucky messenger” distributes. In addition, harmful stress hormones are reduced.

At what age should kids start with a sport ??? This is a question that parents very often ask themselves.

Children do not need special sport to get moving. They have a natural urge to move – at least in the first years of life. Children should always move at any age, as versatile as possible. Instead of purposeful sport until they begin school, the best is only jumping, running, climbing, catch and cycling. From six years on children could do some particular sport. Because only then they are able in their physical and mental development to learn a right sport and to acquire a technique. Previously rich motor skills are often lacking. Which sport is possible at which age, depends on the individual development of the child. Every child is different and that’s why the individual skills should be taken into account. All children should learn, however, swimming and cycling. The lifestyle of the parents is transmitted to their children. Therefore, it is more than necessary to be a good example for the young ones. This way it will not be a problem to promote the natural urge of children.

If children want to do a certain sport, they should be able to choose this alone. Parents can help, provide ideas and accompany them by exploring various sports. Do not be disappointed if your offspring has not selected your favourite sport. No way the sport may be imposed. When the child has chosen the sport that it would like to do, the best thing to do as a parent is hold back and let the kid proceed.

Because at the end what counts is movement and joy what children do! Have fun … .. in movement, sports and games!