Languages
Home » Workout » Yoga: A matter of style(s)
Go Back 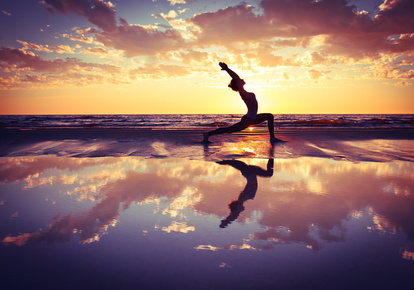 Yoga: A matter of style(s)

The yoga market can be a very confusing and overwhelming place to venture into. Innumerable styles and schools are presenting themselves and are trying to get a slice of this multi-billion $ industry. As a novice to yoga, choosing the right (most suitable) style of yoga, may turn into a big hurdle (and possible stumbling block). Though yoga is a matter of practice and experience, I will attempt to give a bit of an overview of some of the most commonly practiced styles of yoga. Because, for much of the expected long-term effects, yoga is a matter of style…

Before looking as some of the most popular and widely practiced yoga styles today, it is necessary to attempt to give a brief overview of the yoga tradition, focusing, for the scope of this article, on the physical aspects of yoga (yoga postures or “asana”).

The most widely acknowledged scriptures of yoga are 1) the Yoga Sutra of Maharishi Patanjali, 2) the Hatha Yoga Pradipika and 3) the Gherand Samhita. The Yoga Sutra of Patanjali is seen as a broad / all-encompassing treatise on yoga, of which asana is mentioned as 1 of 8 aspects. But the Yoga Sutra do not reveal much details about asana practice, leaving mostly the Hatha Yoga Pradipika (and to a slightly lesser degree the Gherand Samhita) as the most relevant scriptures, at the basis of most known (and unknown) yoga styles of this time and age.

Arguably the 2 most prevalent lineages of yoga today are 1) the different lineages started by T. Krishnamacharya and 2) the Shivananda tradition and its offsprings. Of course, there are many other great and long-standing yoga traditions, such as the different Laya yoga schools (also known as kundalini yoga), kriya yoga, and the entire tantra yoga tradition. Besides that, there are countless schools and traditions which focus less on the physical aspects of yoga and more on meditative practices (sometimes referred to as raja yoga). In addition, there are other major systems of yoga, that emphasise a certain kind of path or lifestyle, such as the yoga of knowledge (gyana yoga), devotional yoga (bhakti yoga), or behavioural yoga (karma yoga).

Asana means “posture” (or “seat”) and refers to a great variety of physical postures that the body (some bodies…) can assume. Some scriptures mention that there are 8.4 million variations of asana, but for most intensive purposes, less than 100 are being widely used. Many yoga styles / schools have limited that number further to a “set of postures” which is geared towards delivering the benefits of all possible variations of yoga postures.

Now, let’s first have a look at some of names of yoga schools that you will sooner or later stumble across, so you can get a feel for which style might suit your needs and personality best.

This is of course by no means a complete list of yoga styles and schools. Constantly, new styles and modifications of existing styles emerge on the yoga market. Some of these become really popular around the world and some may never even be heard of, beyond the walls of a single yoga studio. What seems important is that one can develop a feel for what style or styles of yoga suit one best and then enjoy the regular practice of yoga and its benefits for years to come.

What is important to note is that most yoga styles / schools incorporate the traditional yoga poses into their program. Though there are certainly differences in the selection of postures, the main difference is with regards to how these postures are practiced and what the main focus is. Some styles put most of their focus on the “proper” alignment (e.g. Iyengar), while others focus on using certain modes of breathing. Yet other styles are more concerned with the overall effect of the practice / posture, while again others regard the postures as a means to vigorously exercising the body (kind of mixing aerobics, cross-training, and traditional yoga postures). The list could go on and on, but best to just try some approaches yourself.

Here are some aspects of the practice through with which the different styles distinguish themselves:

It really all depends on your personal goals, likes, tendencies, and abilities. If you want to get in great shape, don’t mind the “no pain no gain” philosophy, and have a good physical basis to start from, then Power Yoga might be the right choice for you. If you need to wind down (and cool down), then Yin yoga might do the trick for you. If you want a highly individualized yoga program, which is ideally suited for your needs and abilities, then a form of Vini yoga or yoga therapy might be the right choice.

Just be aware of some of the contra-indications which come with really almost any style of yoga. If you push your body (or mind) too hard and make that a habit (over years), then it could result in injuries and even illness. Yoga is not, by definition, healthy. The repeated experience of pushing beyond the limits of your body, is no different under the umbrella of yoga, then it is when practicing any other type of sport. The negative long-term side-effects of “yoga at the limit” may be devastating and have the opposite effect of what you had envisioned, when you started on your yoga journey. Unfortunately, many serious yogis and yoga teachers ignore that risk and prefer to follow or even compete with their peers instead.

A dear friend of mine, who is also a yoga teacher, once blatantly spoke out about her attempts to practice Ashtanga Yoga: “It (Ashtanga Yoga) was designed for young, fit, skinny-assed guys and not middle-aged, big-butted women like myself”. It gives a very graphic image of how different styles of yoga suit some, but not all of us.

Some people will only practice yoga when they go to the studio, where they can follow the guidance and instruction of a teacher. But I highly recommend to not limit the yoga practice to the yoga studio, but to find a way to make it a (ideally) daily activity at home. Even practicing a simple set of yoga postures for 15-20 minutes each day, should have far-reaching benefits for one’s health, vitality, and overall well-being. One can of course practice yoga like any competitive sport, but even doing some simple postures regularly, will yield many benefits. And finally whatever your chosen style of yoga, there is one simple element that should be common to all practices: Joy.