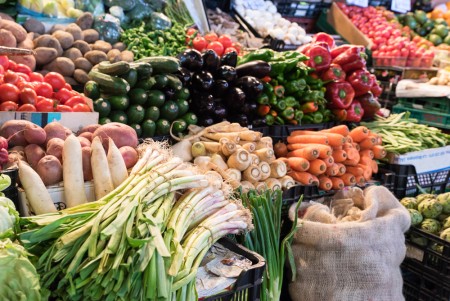 Where I grew up there was almost no import of fruits and veggies, so we eat only local and seasonal. So, when I moved to the Western world I really enjoyed the fact that I could get (almost) whatever fruit or veggie I wanted no matter the season. Of course back then my nutrition knowledge was very limited, and I didn't even realize all the advantages of having the seasonal and local products!

Then the whole organic hype began, and of course I was just as excited about the whole idea. When doing my groceries, I wasn't even paying attention to the origin of the products - for me it was important that it is organic! One day as I was unpacking my groceries (mostly fruits and veggies), I noticed that 90% of what I had bought was imported from somewhere.......organic, but imported. This is when I realized that my way of doing groceries can't be right!

As we all know, fruits and veggies are being harvested when the level of nutrients is at their highest in the development. Once they have been harvested the nutritional value begins to decrease - for some products more rapidly than for others. So, 30 years later, and it is back to the roots in terms of how I do groceries - I try to get as much as possible local and seasonal. For me personally it makes much more sense to buy local products, rather than organic which are being imported. There are three main reasons for this:

Obviously there are products that I can't get local, e.g. kiwi, pine apple, etc. I will still get these products, but I will try to select the ripe ones. For example, I love kiwi, but sometimes they are so hard that I prefer not buying any just because there are nowhere near being ripe.

Meanwhile I also avoid buying fruits and veggies that are not in season, unless it is for a specific recipe and I can't substitute the product with anything else. What is more important for you - buying organic or local products? Also, do you prefer buying seasonal products, or whatever you feel like at this moment?